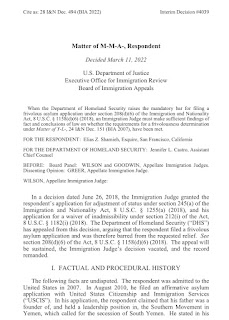 Yes. An immigration judge is bound to make findings of fact and conclusions of law as to whether the asylum application was frivolous in accordance with Matter of Y-L-, 24 I&N Dec. 151 (BIA 2007).

The decision involved an immigration judge's approval of an application for adjustment of status appealed by the Department of Homeland Security. The Department took the position that the applicant had previously filed a frivolous asylum application and was therefore barred from adjusting.

In 2010, the applicant filed for asylum affirmatively with the U.S. Citizenship & Immigration Services' Asylum Office. His application was referred to the immigration court. Before the court, he filed for adjustment of status based on his marriage to a U.S. citizen and withdrew his asylum application.

At trial, the applicant asked to retract information included in his asylum application, acknowledging he had mischaracterized some details. He filed a waiver of inadmissibility for having misrepresented himself. He then went on to testify that the written declaration submitted in support of his asylum application and his testimony at the asylum interview were false.

It gets better. He also admitted he filed false documentation in support of his asylum application and that none of the facts underlying his application were true. Based on these admissions, the Department asked the immigration court to find he had filed a frivolous asylum application.

The immigration judge declined to do so, finding she was not required to enter such a finding. She approved the waiver of inadmissibility for misrepresentation and approved his application for adjustment of status.

Consequences of a Frivolous Asylum Application:

A frivolousness finding is fundamentally important because, once made, it permanently bars a non-citizen from receiving any benefit under the Immigration & Nationality Act. There are no waivers, and no passage of time can cure this permanent bar.

To reach this conclusion though, an immigration judge is required to apply specific requirements before entering a frivolous finding. These are articulated in the Board's decision in Matter of Y-L-.

If an Issue Involves Statutory Eligibility, the Immigration Judge Has to Address it:

Board precedent, the INA, and the regulations are fairly straightforward in requiring that immigration judges must address all issues relating to statutory eligibility before rendering a decision. In other words, if either party raises a dispositive issue to the immigration judge the issue must be addressed.

Due to the permanent bar resulting from a frivolous finding, this is a dispositive issue of statutory eligibility. This means an immigration judge is required to make specific findings and conclusions regarding the Matter of Y-L- factors. The problem in this case is the immigration judge failed to do so.

Among other things, this decision is a good reminder to ensure there is a complete record made at the immigration court level. Specifically, if the issue of the frivolousness of a prior asylum application is raised, rather than encourage the judge to ignore it, we should be pushing the judge to find the application was not frivolous based on the factors outlined in Matter of Y-L-.

Nathan R. Bogart is one of the founding partners of Bogart, Small + Associates. He leads the firm's immigration practice group and focuses his practice on immigration-related litigation, including removal defense before the immigration courts, appeals to the Board of Immigration Appeals and U.S. Circuit Courts of Appeal, and federal lawsuits against the agencies tasked with implementing or enforcing U.S. immigration laws.

Parole in Place for Families of Those Serving in the U.S. Armed Forces

By Nathan Bogart - April 02, 2014
Parole in Place for the Family of U.S. Military  - In most cases, individuals who enter the United States without inspection cannot apply for adjustment of status from within the United States even if they have married a U.S. citizen. Usually, they must return to their home country where they apply for and are interviewed for admission into the United States.  Known as consular processing, this ordeal can lead to very lengthy family separations and unbearable financial costs. Parole in place is a process that allows immediate relatives of those serving in active duty in the U.S. Armed Forces, in the Selected Reserve of the Ready Reserve, or who previously served in the U.S. Armed Forces or Selected Reserve of the Ready Reserve to remain in the United States. If parole in place is granted, the spouse may then be eligible to file for adjustment of status from within the United States, and if approved, lawful permanent residency would be extended. Applying for Parole in Place P
Read more