Showing posts from January, 2014
Show all

By Nathan Bogart - January 22, 2014
Choosing an immigration attorney can be difficult. As a practice area, immigration is unique. So are those who dedicate their time to it. A successful practice requires a great deal of creativity. Even so, countless attorneys will advertise that they have the experience, expertise and passion to help you navigate the process. Here’s our attempt to help you weed through the advertisements and find the right attorney for you: The True Measure of Experience : It is logical to assume that an attorney who has practiced 34 years is automatically better than one who has practiced for one year. In some cases, this may be true. Personally, some of the best attorneys I have ever known were young. Likewise, some of the worst attorneys I have ever known had practiced for decades. Young attorneys may not know everything off of the top of their heads, but older attorneys may be getting burned out. As with most things in life, balance is essential. Focus on the type of experience an attorney has.
Post a Comment
Location: Kansas City, MO, USA
Read more

By Nathan Bogart - January 20, 2014
Happy Martin Luther King Junior Day! Is there a quota for how many immigrants should be detained?   According to a recent report out of the New York Daily News there is.  This is particularly troubling because no other law enforcement agencies have a quota for the number of people they should keep in jail.  This is unprecedented and unique to immigration.  It is important to remember that this is not the number of people the government wants to deport, only the number of immigrants it wants to keep detained while they await a decision as to whether or not they will be deported.  In other words, many of these men and women are individuals who qualify for relief from deportation and have no valid reason to be detained at all, much less month after month until an immigration judge decides what to do with them.  Good job Homeland Security!  We hope this makes you feel better about yourself.... Democrats renew support of a path to citizenship.   Many Democrats and immigration activi
Post a Comment
Location: Kansas City, MO, USA
Read more

By Nathan Bogart - January 13, 2014
Looking ahead to this week in immigration news: The New Year starts about the same as the old.   At the beginning of 2013, talk of immigration reform was all the rage.  2014 has started off no different, with headlines and declarations coming from all sides of the political spectrum.  Much like last year,  Catholic bishops and the Chamber of Commerce both support comprehensive immigration reform.  So does Penny Pritzker , the U.S. Secretary of Commerce.  Not surprisingly, the most conservative members of the Republican party have already begun to voice their opposition to immigration reform.  Even so, more moderate Republicans , much like last year, have offered a ray of hope that immigration reform could happen this year.  At the very least, 2014 should be full of many immigration-related headlines. States getting back into the immigration debate.   Back in 2010, state immigration laws were very much en vogue, with the likes of Alabama and Arizona leading the way with ultra res
Post a Comment
Location: Kansas City, MO, USA
Read more

What Wrestling Has To Say About The Immigration Debate

By Nathan Bogart - January 05, 2014
As I sat here looking at Facebook, listening to the howling winds outside and thinking about the 0 degree temperatures I have no intention of facing today, I saw the following video shared on a friend's timeline:   While the language used by "el patrón de la migra" is more than a little harsh, I have to say I was impressed by the creative use of lucha libre to express many of the feelings both sides feel about the immigration debate. I actually thought "el patrón" humanized immigrants to the some degree by vocalizing what many of them hear every day from those who are not saying it for entertainment value. In fact, my favorite part of the video had to be when the promoter explained , "After the cameras are turned off, the lights turned off, and the show's over, you'd be surprised at that small little line by the locker room of Latinos who want autographs of la migra." Maybe if we could all just attend some wrestling matches together,
Post a Comment
Location: Kansas City, MO, USA
Read more 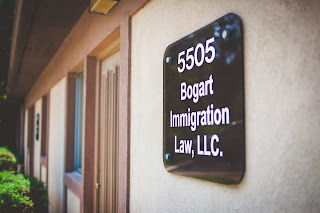 For the last year and a half, we have been happy to serve our clients at 5505 Foxridge Drive, Suite 104 in Mission, Kansas.  We've loved being in that location and we have especially enjoyed being able to meet so many wonderful and interesting people during our time there. Now, as we begin 2014, we are changing offices.  Our new address is: 5509 Foxridge Drive Mission, KS 66202 If the address looks just about the same, that would be because it is.  We're only moving right next door, so we shouldn't be too hard to find.  Our telephone numbers and e-mail addresses will also remain the same , although there may be some technical difficulties with both associated with the move. We feel this move will allow us to better serve our clients and their interest. We look forward to many more years of being able to serve our community.  Feel free to come check out our new office and let us know if there's anything we can do to help out! Stay tuned for more changes..
Post a Comment
Read more
More posts