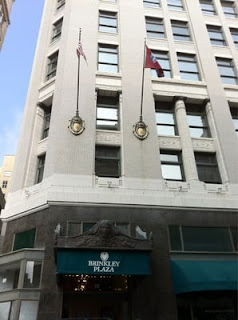 The Memphis Immigration Court has been busy during the pandemic. The court is in the process of expanding, adding additional space, more courtrooms, and new immigration judges. At the start of the pandemic in March 2020, the court only had four active IJs (two had recently retired, but two from Louisville were reassigned to Memphis). As of the writing of this post, the Memphis court's website lists eleven IJs. My court calendar confirms a twelfth IJ who I have included in this list. Rumors are there will be more. Here's who's new:

Judge Alisha Campos: Judge Campos was appointed to the bench last October. She graduated with a B.A. from Arkansas State and a law degree from the University of Houston. Uniquely, Judge Campos has practiced both as a trial attorney for the Office of the Principal Legal Advisor, Immigration & Customs Enforcement, and as a private immigration attorney. Now she's hit the trifecta when it comes to removal proceedings. She is licensed in Texas. Her full bio is available here.

Judge Sean D. Clancy: Judge Clancy was originally appointed to the Harlingen Immigration Court in June 2018, and it seems he has transferred to Memphis recently. He earned his B.A. from Ole Miss and his J.D. from Washington and Lee University. He has a lengthy history of working as an attorney for the U.S. Citizenship & Immigration Services, Immigration & Customs Enforcement, and legacy INS. He also served in the Peace Corps in Ashgabat, Turkmenistan at one point. His full bio is available here.

Judge Kevin P. Guillory: Judge Guillory is one of the more recent appointees, joining the bench in December 2021. He earned his B.A. and J.D. from LSU. Most of his experience seems to come from the D.A.'s office in Orleans Parish, LA where he basically served from 2005 to 2021 with a two-year stint in private practice somewhere in the middle. All in New Orleans. His full bio is available here.

Judge Brandon J. Josephson: Judge Josephson is staying home in Memphis where he was most-recently serving as the Deputy Chief Counsel in the Office of the Principal Legal Advisor, Immigration & Customs Enforcement in Memphis. From 2007 to 2012, he served as an Assistant Chief Counsel in the Miami OPLA office, so he was with ICE for quite some time and will be well-versed in immigration court procedures. Prior to his time with ICE, Judge Josephson was in private practice focusing on civil litigation. He earned his B.A. from Illinois State University and his J.D. from the University of Miami School of Law. His full bio is available here.

Judge Kelly B. Lake: Judge Lake is a new arrival to Memphis, but she is not a new IJ. She was appointed in 2019 to the San Francisco Immigration Court and then transferred to Memphis in 2021. Prior to joining EOIR, Judge Lake accrued two decades worth of experience as a prosecutor at both the state and federal levels, including stints as a Resident Legal Advisor in the Overseas Prosecutorial Development and Training Section in Islamabad, Pakistan and Lagos, Nigeria. Judge Lake earned her B.A. from UCLA and her J.D. from Loyola Law School of Los Angeles. Her full bio is available here.

Judge Luis A. Maldonado: Judge Maldonado has been on the bench in Memphis for quite a while compared to many of the IJs on this list. We just don't know much about him because the court was shut down for a year-and-a-half. He was appointed in March 2020. He earned his B.A. from Stetson University and his J.D. from the University of Florida. His immigration law experience is extensive. From 2016 to 2020, he served as an associate counsel to the U.S. Citizenship & Immigration Services in Atlanta. Prior, he was with the Office of the Principal Legal Advisor, Immigration & Customs Enforcement, from 2011 to 2016 in Orlando. From 2009 to 2011, he was an associate legal advisor in ICE's National Security Law Section in D.C. From 2006 to 2009, he was an assistant chief counsel with OPLA in Orlando. Prior to his federal experience, Judge Maldonado served as a Senior Attorney with Child Welfare Legal Services in Orlando. From 2004 to 2006, he was an immigration staff attorney with the Legal Aid Society of the Orange County Bar Association. He is licensed in Florida. His full bio is available here.

Judge Irma J. Newburn: The Memphis Immigration Court will not be the first place Judge Newburn has served as a judge. From 2016 to 2021, she served as a District Judge for Comanche, Cotton, Jefferson, and Stephen Counties in Oklahoma. Prior to her time as a judge, Judge Newburn served as an Assistant D.A. for Comanche and Cotton Counties and was previously in private practice in Lawton, OK. Judge Newburn graduated with her B.A. from Cameron University and earned her J.D. from Oklahoma City University School of Law. Her full bio is available here. Oklahoma media also ran a report on Judge Newburn's appointment back in October.

Judge David A. Russo: Like Judge Maldonado, Judge Russo was appointed in March 2020. Judge Russo was previously with the Federal Emergency Management Agency from 2017 to 2020. From 2011 to 2016, he served as a deputy state judge advocate for the Georgia National Guard in Atlanta. He is also an Army veteran, serving as a JAG officer from 2000 to 2008. Judge Russo spent three years in private practice in Georgia from 2008 to 2011. Judge Russo graduated with a B.A. from Tulane University, and he earned his J.D. from LSU. His full bio is available here.

As always, this info about new IJs has nothing to do with my opinion of the hires or how the individual IJs are rumored to be performing. Most are not even hearing cases yet, so there I have no opinion to share.

What I can say is that practice before the Memphis court is about to get a whole lot different. The act of managing so many different personalities and legal philosophies presents a new challenge that immigration litigators in the region have not faced before. Add that to the new faces in the detained courts in LaSalle and Oakdale, Dallas, and Kansas City, and it's clear the post-pandemic world of removal defense will be a new one for Northwest Arkansas attorneys.

All of that being said, this is an interesting set of changes and the experience and backgrounds of the new IJs are diverse. There is definitely more private practice experience than we have seen in a few years, and some have extensive immigration law experience from both sides of the courtroom. That has the potential to be a very positive change.

Nathan Bogart is a removal defense attorney at the Fayetteville, AR based firm, Bogart, Small + Associates. The views expressed in his articles and on this blog do not necessarily represent the views of his firm or associates and they are not legal advice.

Parole in Place for Families of Those Serving in the U.S. Armed Forces

By Nathan Bogart - April 02, 2014
Parole in Place for the Family of U.S. Military  - In most cases, individuals who enter the United States without inspection cannot apply for adjustment of status from within the United States even if they have married a U.S. citizen. Usually, they must return to their home country where they apply for and are interviewed for admission into the United States.  Known as consular processing, this ordeal can lead to very lengthy family separations and unbearable financial costs. Parole in place is a process that allows immediate relatives of those serving in active duty in the U.S. Armed Forces, in the Selected Reserve of the Ready Reserve, or who previously served in the U.S. Armed Forces or Selected Reserve of the Ready Reserve to remain in the United States. If parole in place is granted, the spouse may then be eligible to file for adjustment of status from within the United States, and if approved, lawful permanent residency would be extended. Applying for Parole in Place P
Read more