Yesterday, the Executive Office for Immigration Review, sub-agency of the U.S. Department of Justice tasked with running the immigration courts, announced that, unless otherwise specified, non-detained immigration courts that have not resumed hearings since the start of the pandemic will remain closed to hearings through at least December 18, 2020. This means the earliest they can reopen is December 21, 2020 - the week of Christmas. 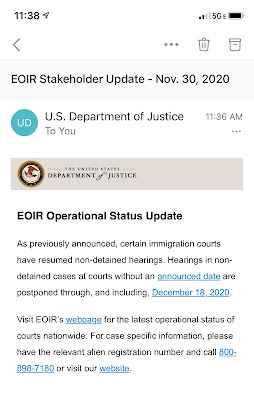 This has been going on for months and, every Monday, every EOIR registered attorney and other stakeholders receive a new e-mail extending the non-detained closure yet another week.

NOTE: This announcement does not extend to every immigration court. It does not apply to detained courts, for example. There have also been some non-detained courts that have already resumed hearings in full or limited capacity.

Most importantly, even the non-detained courts not holding hearings at the present expect all filing deadlines to be met and their filing windows remain open for in-person or mail filings. Many courts were accepting e-mail filings with various, some might say ridiculous, limitations, but that was supposed to end this week and no real guidance has been received as to whether it will continue. In general, I stopped filing via e-mail several months ago absent emergencies.

This pause in non-detained hearings extends to all of our "local" courts here in Northwest Arkansas. Memphis, Kansas City, and Dallas are all impacted. It does not apply to our detained courts in Jena or Oakdale, LA. It also does not apply to whatever court happens to be handling hearings from the Winn or Jackson Parish detention centers at the moment.

Count on this continuing for the foreseeable future. With COVID cases rising every day, it is hard to imagine the courts would choose the weeks of Christmas and New Year to reopen fully. We also know the Memphis Immigration Court has rescheduled pretty much all of its December master calendar docket. Then again, the immigration courts do inexplicable things all the time. We'll know more next Monday.