This morning, the Executive Office for Immigration Review, sub-agency of the U.S. Department of Justice tasked with running the immigration courts, announced that, unless otherwise specified, non-detained immigration courts that have not resumed hearings since the start of the pandemic will remain closed to hearings through at least January 8, 2021. This means the earliest they can reopen is January 11, 2021. There is no word on whether they will open that week or not, but we should continue receiving these updates until they do. 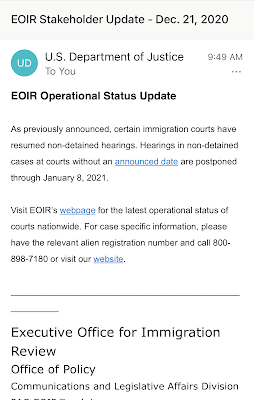 For months, EOIR has been sending weekly updates, but this was the first we've received for a couple of weeks.

NOTE: This announcement does not extend to every immigration court. It does not apply to detained courts, for example. There have also been some non-detained courts that have already resumed hearings in full or limited capacity.

Most importantly, even the non-detained courts not holding hearings at the present expect all filing deadlines to be met and their filing windows remain open for in-person or mail filings.

This pause in non-detained hearings extends to all of our "local" courts here in Northwest Arkansas. Memphis, Kansas City, and Dallas are all impacted. It does not apply to our detained courts in Jena or Oakdale, LA. It also does not apply to whatever court happens to be handling hearings from the Winn or Jackson Parish detention centers at the moment.

Count on this continuing for the foreseeable future. With COVID cases rising every day, it is hard to imagine the courts would choose to reopen fully just before the inauguration. This is the Trump administration though, so anything is possible. As always, we should know more next Monday. Unless we don't.