Just What Kind of Fraud are we Really Worried About?

By Nathan Bogart - October 09, 2018
Normally, this is a blog about removal defense and, more broadly, immigration-related litigation.  Even so, I wanted to discuss an issue that's been on my mind a lot the last couple of years using an issue I've been seeing in family-based immigration, not litigation.

Since Trump took office, there have been numerous immigration-related policies and proposals that have taken the news by fire.  From the Muslim ban to family separation, there are a ridiculous number of cruel actions that justifiably stir up shock and anger.  They have motivated thousands to take to the streets and demand change.  They have inspired lawsuits.  That's a good thing.  We shouldn't be okay with cruelty in any form.

Yet, while attention has been focused on these horrific activities, the administration and its employees in the immigration agencies have also silently been implementing changes, policies, presumptions and attitudes that will and do have devastating effects.  Most of these will never see the news, but they are still reflections of an administration that has embraced an anti-immigrant, nativist attitude towards immigrants and their families and communities.  This attitude is at the root of the news-catching drama, but it permeates down to smaller policies and omissions that may have a long-lasting impact.

One small example is something I have noticed in my last several trips to the Fort Smith Field Office of the U.S. Citizenship & Immigration Services ("USCIS").  USCIS handles benefit applications.  Whether an individual is petitioning a noncitizen family member, applying for DACA, or a temporary work visa, USCIS is involved.  Without a doubt, the attitudes of USCIS and its employees matter.  In discretionary cases, they can make the difference between an approval or denial.

Furthermore, in the vast majority of cases, USCIS is the only agency our clients ever interact with.  This means USCIS, and the attitude of its employees, will be the only real experience they have with the U.S. immigration process.  For individuals not represented, USCIS is often the only source of reliable information they are going to get during the process.  They rely on USCIS to be even-handed and impartial.

One of the biggest problems plaguing immigrant communities when it comes to those seeking pathways towards permanent residency or other statuses is what the legal community call "notario fraud." 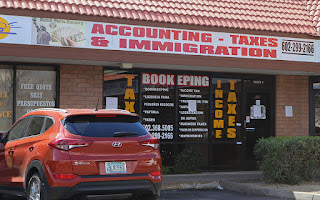 Get your taxes & immigration papers done at the same place

In communities throughout the U.S., a variety of different individuals and companies have set themselves up as being able to provide advice concerning the immigration process.  Many refer to themselves as "notarios publicos," or public notaries.  Others use the term consultants, service providers, or some other type of professional.  Regardless of the terminology, preparing immigration forms, evaluating eligibility for immigration benefits, or giving immigration advice without a law license is illegal.  It's called the unauthorized practice of law. 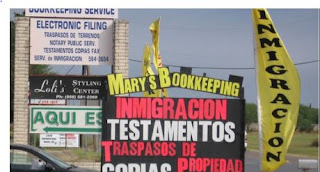 For years, when you'd enter a USCIS facility, pamphlets, signs and other information warned against the dangers of seeking the wrong advice and the unauthorized practice of law.  It's doubtful USCIS ever really did enough to push the issue, but at least it distributed materials and warned individuals about the dangers of seeking legal advice or work from lawbreakers. 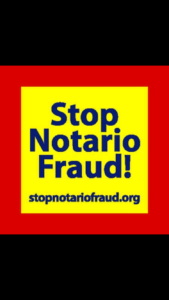 Lately, I have not seen those signs and pamphlets; at least not in the Fort Smith Field Office.

Instead, I've been seeing this pamphlet: 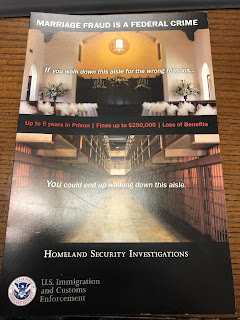 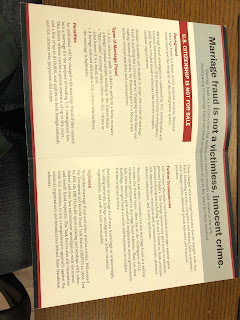 Marriage fraud is not victimless

This pamphlet has been everywhere, at every service window and apparent for all to see.  That tells me the fraud USCIS is most concerned about is marriage fraud, or noncitizens who marry U.S. citizens so they can become lawful permanent residents; not fraud aimed at noncitizens and their family members.

I don't live under a rock.  Marriage fraud happens.  That data's not good, but as of 2010 (the last year I found numbers), only two-tenths of one percent of marriage-based residency applications were found to be fraudulent per USCIS' own numbers.  Critics counter the number suggests the system is so easily manipulated that USCIS was only able to identify such a small number.

The number is probably higher.  Going all the way back to 1986, the now-defunct Immigration & Naturalization Service ("INS") estimated that one and three marriages were fraudulent.  That sounds very alarming, but after completing an investigation, that rate was reduced to only 8%.  Even if critics are correct, marriage fraud is probably not rampant.

On the other hand, rates of fraud perpetrated against noncitizens are significantly higher than the likely rate of marriage fraud.

Admittedly, there are gaps in our ability to understand the fraud perpetrated by notarios and, unfortunately, shady attorneys.  Much of that comes down to many victims simply not reporting the fraud.  Making matters more complicated, fraud is widespread, covering various immigration benefits or, in some cases, capitalizing on rumors of benefits, panic in the community, or a misunderstanding of policy changes.

In some jurisdictions, like Arkansas (under our current AG), there is no regular investigation of allegations of fraud against immigrant communities, meaning that even when fraud is reported, it isn't tracked and no actions are taken.  There are also inconsistencies between jurisdictions regarding how fraud is tracked and prosecuted.  Unfortunately, that means that in states taking the problem seriously, we sometimes have no idea how many victims there are.

What we do know is that fraud committed against noncitizens is significantly higher than any reported rates of marriage fraud.  This brings me to my ultimate point: the message USCIS is sending so many individuals and families is, "we don't care about you and we don't believe you."

We should lose our collective minds over kids rotting in cages, families being torn apart and religious discrimination.  But we also need to recognize that these are not one-off policies perpetrated by an incredibly cruel administration.  Instead, these are the results of a broader attitude, present throughout the Department of Homeland Security, that noncitizens lie.  They take.  They commit fraud.  They're a threat to our national security.  And some, we assume, are good people.  Just not most of them.

This attitude dominates despite ample evidence that the vast majority of applicants for immigration benefits do not lie.

USCIS, just like ICE, CBP and the immigration courts, is not going to give immigrants the benefit of the doubt.  Instead, fraud is presumed even though it is so infrequent as to be a statistical anomaly.  That's my rant for today.
Arkansas Arkansas Immigration Arkansas Immigration Attorney Marriage Fraud notario fraud Notarios USCIS
Location: Fayetteville, AR, USA